A recent study indicates that mobile network data offers a far more cost-efficient way of analysing the travelling volumes of crowds than traditional questionnaire surveys do. The strength of mobile network data is its particularly comprehensive sample—both chronologically and regionally.

“The problem with questionnaire surveys is that they are expensive to implement and the samples are small, which means that rare or exceptional movements of crowds can easily be left undetected,” Telia specialist Reetu Jormakka explains on the analytics of crowds.

Fortunately, mobile phone network technology has developed in recent years in a direction that appears to address the shortcomings of questionnaire surveys.

“Signal data from the mobile phone network, which is based on the movements of millions of people, however, produces a far more comprehensive view of the movement patterns of people both chronologically and regionally,” Jormakka explains.

According to Jormakka, collected traffic-related data also becomes obsolete very quickly. Thanks to the mobile network data, substituting information can be collected faster than before and at a lower cost.

“In my master’s thesis, I validated the usability of mobile network data for creating origin–destination matrices in long-distance traffic in Finland. For example, I inspected the travelling volumes between provinces and municipalities, their seasonal changes and the distributions of transport mode,” Jormakka says.

“This finding can be interpreted in such a way that mobile network data better corresponds to reality than materials collected using other methods,” Jormakka summarises and continues, “In other words, mobile network data can produce reliable destination data also for sparsely populated areas where the sample sizes of questionnaire surveys typically remain lower.”

The results of the mobile network data also produced findings on the transport modes used that corresponded to other materials.

“By inspecting the geographical trails and trip durations obtained from mobile phone network signals, it was possible to differentiate from the data whether the transport mode was road, railway or flight,” Jormakka says.

One of the most significant advantages of mobile network data is its chronological coverage, as data is continuously collected.

“In my master’s thesis, I also inspected the suitability of mobile network data for observing long-distance movement during different seasons. In addition, I investigated how seasonal variation can affect the collection of accurate data,” Jormakka explains.

Based on the study, long-distance travels are the most common in Finland in summer and the least common in winter. It was an interesting observation that exceptionally great summer peaks in travel volumes made it difficult to estimate the annual total number of trips using questionnaire surveys. 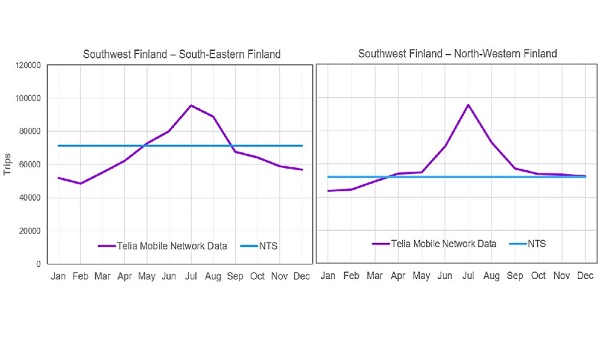 “When comparing materials with each other, I noticed that the annual total travel volume was estimated too low with questionnaire surveys for large area pairs that had a sharp summer peak,” Jormakka says.

Although mobile network data already appears to be more suitable for creating origin–destination matrices than questionnaire surveys, the method is continually improved.

“For example, transport modes were previously differentiated by specifying that a flight is faster than other transport modes and a railway takes a route different from a road. In the future, modes of transport can probably also be analysed without corresponding constraints,” Jormakka envisions.

USE CROWD INSIGHTS TO SUPPORT DECISION-MAKING

Do you want to build widescale understanding of how people move around? Let's discuss how your business can benefit from anonymised mobile network data.

B2B English Article
Previous article
From a joke to a market leader – Satu Orava, who was “born next to a tyre” makes heavy traffic smart
A 100 years ago, Onni Virtanen developed new technology for lorries in Laukaa. Now his ...
Next article
More efficient traffic planning in Helsingborg with Crowd Insights
When the City of Helsingborg was planning the development of its commuter belt, they decided to ...