Helsinki wants to be the most viable city in the world: “We need a huge amount of innovation and technology”

Helsinki aims to be the most viable city in the world. Jan Vapaavuori, the Mayor of Helsinki, spoke at the startup event Slush and said that, in an unstable world, Helsinki can provide people with a predictable environment. This means many things, such as security and a reliable airport. “A good life means different things for different people, but being carefree is usually a key factor,” says Vapaavuori.

The best environment is not created in office buildings, but together with the city residents: “We are used to big companies changing the world, but this is about to change. Cities have a better dialogue with the residents. We need a community with confidence, open data and transparency,” says Vapaavuori. “The barriers between different players in Helsinki are low, and the city is completely different from places with a higher hierarchy.”

Technology plays an important role in making Helsinki the most viable environment in the world and trying to solve such issues related to, for example, the climate change that no city can escape.

“We need a huge amount of innovation and technology,” Vapaavuori emphasizes. “Cities must act as platforms for innovations and tests. As a city, Helsinki is big enough but at the same time small enough to make things happen.”

One innovation was made just before Slush, when a robot project utilizing the 5G network Telia had opened at the Helsinki-Vantaa airport was launched at the airport. The aim of the joint project of Finavia and Telia is to study how passengers and the personnel find an autonomous robot. The robot can be controlled remotely, and the real-time video it transmits makes it possible to ensure that everything is working as it should. The robot can also guide passengers. (The article continues under the picture.) 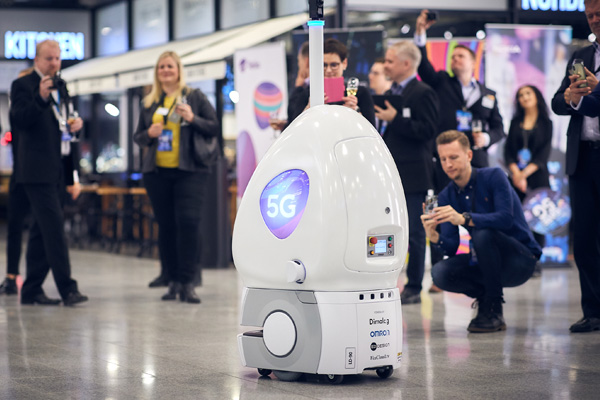 “The airport benefits from a latency-free and high-capacity 5G connection, as a lot of people and data are moving there, and security and smooth service are of paramount importance,” says Janne Koistinen, Telia’s 5G Program Director.

Helsinki-Vantaa has been ranked among the best airports in the world year after year in international surveys measuring service quality. The use of new technology provides the airport with new opportunities to further improve the service.

In Oulu, the innovation platform is one of Finland's first 5G networks

A 5G network has also recently been opened in Oulu, where ecosystems, co-development and the inclusion of city residents are familiar practices. The technology and its use for the benefit of business and residents play a significant role, and the city strives to work as a test environment for new solutions.

With the 5G network opened in November, the Oritkari-Nuottasaari area will become one of the world's first industrial 5G environments. Thanks to the 5G network, logistics operators and industrial companies in the area can develop innovations and new kinds of operating models enabled by the ultra-fast network.

“We estimate that the first applications of 5G can be found in industry, where an ultra-fast, latency-free network benefits for instance remote control of processes and versatile real-time data usage. Oulu's strong ecosystem and the players’ open-mindedness in the introduction of new technologies drove our decision to continue the deployment of 5G in Oulu,” says Koistinen.

5G technology has been tested in Oulu even before. Last spring, Nokia and Telia performed a test with Intel to transfer video produced by a video analytics application over the 5G test network from Nokia's factory in Oulu to Telia’s data center in Helsinki. The 5G network has also been tested at StoraEnso's Oulu mill, where augmented reality and 5G technology solutions were utilized for the maintenance of the mill.

Actual commercial activity in the 5G network can be launched at the beginning of 2019, when the licences for new frequencies issued by the Government will enter into force. However, 5G uses are already being developed: in Telia’s 5G Finland network, companies, organizations and startups are together creating 5G uses to be applied both in the test network and after commercial operations have been launched.

Article 5G
Previous article
What is 5G - Questions and Answers
A large number of questions were sent in advance for Telia’s ‘5G is here’ webinar, but there was ...
Next article
Changes to billing or account information
Report changes in My Telia for Business or in our chat.